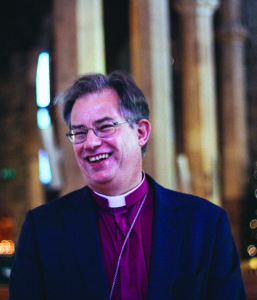 9 The true light, which gives light to everyone, was coming into the world. 10 He was in the world, and the world was made through him, yet the world did not know him. 11 He came to his own, and his own people did not receive him. 12 But to all who did receive him, who believed in his name, he gave the right to become children of God, 13 who were born, not of blood nor of the will of the flesh nor of the will of man, but of God.

14 And the Word became flesh and dwelt among us, and we have seen his glory, glory as of the only Son from the Father, full of grace and truth. 15 (John bore witness about him, and cried out, “This was he of whom I said, ‘He who comes after me ranks before me, because he was before me.’”) 16 For from his fullness we have all received, grace upon grace. 17 For the law was given through Moses; grace and truth came through Jesus Christ. 18 No one has ever seen God; the only God, who is at the Father’s side, he has made him known.

19 And this is the testimony of John, when the Jews sent priests and Levites from Jerusalem to ask him, “Who are you?” 20 He confessed, and did not deny, but confessed, “I am not the Christ.” 21 And they asked him, “What then? Are you Elijah?” He said, “I am not.” “Are you the Prophet?” And he answered, “No.” 22 So they said to him, “Who are you? We need to give an answer to those who sent us. What do you say about yourself?” 23 He said, “I am the voice of one crying out in the wilderness, ‘Make straight the way of the Lord,’ as the prophet Isaiah said.”

24 (Now they had been sent from the Pharisees.) 25 They asked him, “Then why are you baptizing, if you are neither the Christ, nor Elijah, nor the Prophet?” 26 John answered them, “I baptize with water, but among you stands one you do not know, 27 even he who comes after me, the strap of whose sandal I am not worthy to untie.” 28 These things took place in Bethany across the Jordan, where John was baptizing.

About Bishop Steven Croft: Steven John Lindsey Croft is a Church of England bishop and theologian specialising in mission. He is the Bishop of Oxford since the confirmation of his election on 6 July 2016. He was the Bishop of Sheffield from 2008 until 2016; previously he was Archbishops’ Missioner and Team Leader of Fresh Expressions, a joint Church of England and Methodist initiative.
Powered by Sermon Browser