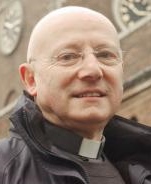 28 “You are those who have stayed with me in my trials, 29 and I assign to you, as my Father assigned to me, a kingdom, 30 that you may eat and drink at my table in my kingdom and sit on thrones judging the twelve tribes of Israel.

About The Reverend Ron Curtis: Reverend Ron Curtis, was priest in charge at St Thomas's Church, Market Street, Stourbridge from 2005 until 2012 when he retired to Oxfordshire. He is now part of the Witney ministry team with permission to officiate.
Powered by Sermon Browser